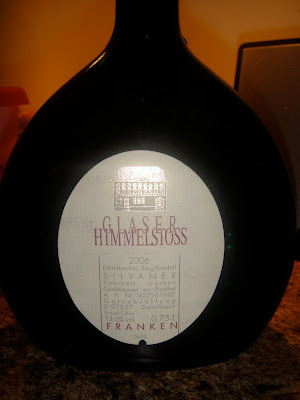 Glaser Himmelstoss, Silvaner, Franken, Germany, 2006.
I'm a little late blogging on this, as I drank it AGES ago, well by AGES I mean around Christmas. It was a gift from an MW friend, as she knows I need to study up on my non-Riesling German varieties. Like Muller Thurgau, which is generally flabby, lower in alcohol and tastes like nothing, the opposite of Silvaner really.
This wine actually had some heft, and it's high acidity and peachy character give it a little bit of length and complexity. I'm not saying it's Grand Cru Burgundy or anything, it's a simple easy drinking wine that went quite well with cauliflower soup and grilled cheese (check out my friend Rob's blog for that recipe...)
Silvaner is mostly found in Rheinhessen and Frankenm though some can be found in Alsace, Alto-Adige, Switzerland and Eastern Europe. I think it makes a nice alternative to something like Sauvignon Blanc or Riesling. Even though it's not as aromatic, the acidity makes it slightly comparable... or at least that's my silly little opinion.
Posted by Amy at 9:27 AM

We're really enjoying your site. You present real and relevant content, nd do a great job of putting your own spin on things.

Keep up the great work and enjoy your wine!

Silvaner is a REALLY good wine. Thanks for posting!