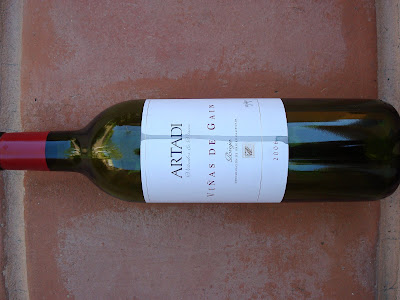 Artadi, Vinas de Gain, Rioja, 2006.
It's no secret to anyone I've talked to int he last 7 weeks that the red wine paper on the Master of Wine exam was very difficult for me! The first 4 wines were from... you got it! RIOJA! Where did this one think they were from? BORDEAUX, my friends, Bordeaux. Don't know how, don't know why, but that was my best educated guess.
And last night when blind tasting I had this in SOuthern Rhone. To which Peter replied, "Would you get that color in Southern Rhone?" To which I replied, "Shut it Hunken." to which he replied, "Maybe you want to give it another guess?" To which I replied, "No, final answer." To which he replied, "Well, then you're wrong." To which I replied, "Shut it Hunken."
Now I stand behind my S. Rhone guess - as this wine had moderate (and in retrospect perhaps LOW) acid, which is sort of a Grenache (and incidentally, Tempranillo) trait. It was moderate plus alcohol to me, label says 13.5%, but I am not buying that, and very nice fruit extraction. A modern Chateauneuf-de-pape. But of course, the alcohol would have been more like 15% for CDP and perhaps, yes, Hunken is right, the color would have been so dark. And the tannisn were slightly more grippy than CDP, I guess. What do I know?
At any rate (was that most boring thing you've ever read or what? Almost put me to sleep to write it), the wine was lovely and had nice Framboise flavors - hello Southern Rhone from Spain. 12 to 14 months in 40% new French Oak... ain't that a bitch?? How can one identify Rioja without the American Oak?
$26 at K&L, though I'm sure its pretty widely available at other stores.
Posted by Amy at 6:07 PM

100% Tempranillo evidently, so not even any Garnacha comin' atcha.

Yeah - I was just trying to make myself feel better...

Is it time to unbookmark this page?

Still watching for a read. Going to Bordeaux for the seminar in Feb. May stay with Finn. Wish you guys could come.