There's a stink in my Loire! 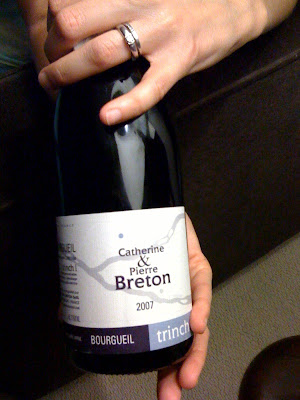 I recently blogged about the 2006, but found the Catherine and Pierre Breton, Bourgueil, "trinch", 2007 at the Cheese Store of Silverlake for $19.99 and thought BINGO! The 2006 was so delish - how could the 2007 let me down?
Well, for starters, this wine suffers from a little problem that we call reduction. It was shockingly very very stinky - hard boiled egss kinda stinky. I was shocked because these wines are usually so beautifully made that I just can't imagine what went wrong here. I take that back, I know what went wrong here, but how did it happen to my fav Breton??
Frequently with a little oxygen via decanting the eggy aroma will go away - but sometimes its just too far gone... Well this sort of did half and half. We decanted and swirled... some of it blew off, it certainly became a lot less offensive, but some of it didn't, and I really am not into wine with stink. I like to smell the fruit and the savory elements of Cabernet Franc and sadly I felt that the stink overwhelmed the fruit.
While I really really really want to recommend this wine, its a tough one for me. My friend Marcel said, "This smells like something you'd pay a lot of money for at a fancy restaurant." and I thought that was hilarious, because in some ways he's right - I think a lot of flawed wines are tolerated as the product of "terroir" and are served at fine places. And, just for another opinion, Peter really liked this wine. So decide whose side you're on and go see Julian at the Cheese Store either way. They also just got in the "new" vintage - 1998 - of Lopez de Heredia Rose. It's $28.99 so I refrained this time as we really are trying to budget... But I know its delicious.
This budgeting crap is so hard.. and that's part of the reason the wine blog has been so sparse lately!!! We are drinking samples - I will have to start to blog on those!
Posted by Amy at 9:49 AM

Yes, spill, I believe you are correct, therefore I was forewarned!