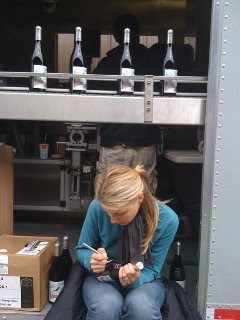 Yesterday we bottled 2007 Hocus Pocus. I think it's our best vintage yet. Really, I'm not just saying that because it's the wine we have to sell now.
I always sit on the bottling wine and write on a few bottles with a silver paint pen. Usually I write about whatever is on my mind. I've written long passages about wanting to eat donuts and Paris Hilton. That sounds weird. I don't mean I write about eating Paris Hilton, I just meant about Paris Hilton in general. But yesterday I wasn't in that sort of mood. I was pensive. So I wrote about the universe. I drew stars on the bottles. I made wine bottle art. And then I let the bottles dry and put them randomly back in the line and sat and wondered where they would end up and who would hold these bottles in their hands in a few months. And where would we be?
It really is like giving birth to another child, except without the labor and the pain. And the pregnancy. And the hormone issues. Other than that, it's JUST LIKE IT.
We are off to Texas to go to a wedding today. It's going to be outside - the ceremony and the reception. The high is going to be 54 and the weather overcast. There's no back up plan, it's in a park. So it's outside rain or shine. Do you think it's ok that I'm wearing Ugg Boots with my skirt? Brown Ugg boots, a black turtle neck and a grey floor length skirt. I'm such a fashionista!!!!!
Wonder what kind of wine they will serve? I'm taking bets. $5 each. We'll start a virtual pool. We sent some of our wines ahead as a wedding gift, but those don't count. Other than Genuine Risk and Hocus Pocus what will we be drinking???
I'm guessing Cotes-du-Rhone. My money is in. How about you?
Posted by Amy at 6:49 AM

1989 Cordier Estates Fume blanc Ste. Genevieve Grand Reserve probably. & the Lakers will crush Dallas Sunday just as they did Houston & San Antone. Texas is a terrible part of the world.

The comment about eating Paris Hilton will garner you a whole new set of readers. Good marketing.

Well, we were all wrong. Black Box Cabernet and Merlot, some pretty low quality Vinho Verde and a lot of keg beer. We all lost.

It was cold in Tejas! Too cold for me.