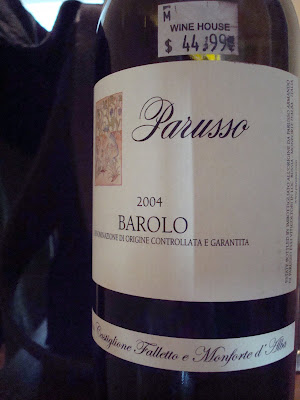 Parusso, Barolo, 2004.
Ok, I LOVE Barolo. I mean, for me it would be a hard choice if I had to pick between Bonnes Mares and Barolo to drink for the rest of my life. But Barolo, particularly this Barolo, is so spectacular for the money. There aren't a lot of GREAT Burgundies out there for $45. That's like a Village level retail price. The Grand Crus are sooo expensive. I actually drank both Musigny and Bonnes Mares at dinner last night (Vougeraie 2006) and they were spectacular, but I certainly can't afford to drink them. And then, of course, they were way too young. Some might even say that drinking this wine, a mere 2004, is too young, but it had so much depth and texture I was just over the moon.
We drank this when I was having a particularly bad day. Pete surprised me. I blind tasted and knew immediately - ahhhh! Barolo!!! Nothing else like it.
$44.99 at the Wine House and worth every GD penny.
Posted by Amy at 9:11 AM

I was looking for a reasonably priced barolo to share with my wife since she's never had it. So I bought a bottle of this because of your post. I'll let you know how it goes....