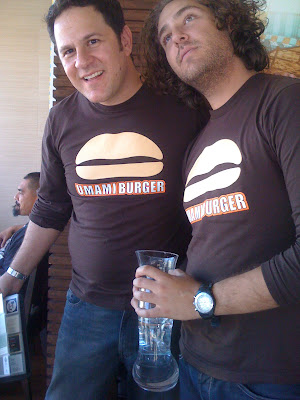 UMAMI BURGER!!!
I'm not a foodie, I actually kind of hate that word. Nothing worse than a self-proclaimed foodie. And ya'll know I never do restaurant reviews, mostly because I don't eat meat very well. I eat it sometimes because I have to, but usually its with a disgusted look on my face.
But here, at Umami Burger, I ate more meat at one sitting than I ever have in my life ala the Turkey Confit Burger. I guess the turkey is fried in duck fat and then ground. But its not fatty or oily at all. But not too dry either. The also have a lamb burger and about 8 other burgers made of beef. I have read some negative reviews of the french fry serving, but really, how many french fries does a person really need when you're eating a big piece of beef on a soft buttery bun? In case you don't know, not many. I think it's the the perfect serving size. Especially if you're Mary Kate Olsen.
Proprietor, Adam Fleishman (pictured on the left), told me that they are working hard on perfecting a veggie burger that will made primarily from mushrooms. YUMMMMAMMMIII!
The BEST thing about Umani Burg, besides the food, is that its BYO. So you can get in and out for cheap, which is REALLY important for those of us with unemployed husbands. (Peter, in case you read this, just making a little recession joke honey!) We went for lunch and spent $20, which was far better money spent than the $24 we spent at the ArcLight seeing The Wrestler (Ugh! the worst script!!!).
Umami Burger is on La Brea between 8th and 9th, east side of the street. It's in my hood, I can literally walk there, so when you come this way, call me, I'll meet you!
Posted by Amy at 7:05 AM

Does this mean you object to my review of Umami Burger in which I use the word foodie about a dozen times?

I will be calling you - I plan to eat here with some amount of frequency. Yum!

Crap! I didn't read your blog about it yet - I had second thoughts before I went off on the self proclaimed foodie - but I knew it would elicit outrage among said group - couldn't help myself!!

Amy, I think my use of the term foodie was tongue-in-cheek enough for me to not feel offended by your critique of the term.

However, now I am offended that you read OTHER reviews of Umami Burger in your research for this post, but not mine.

As I said in my last comment...whatever!

Because you're such a foodie, I didn't want your much more comprehensive review to influence my much "anti-foodie" POV.

I have a screener of The Wrestler, the borrowing of which would have cost you nothing.

I already saw that terrible movie. What about Slumdog Millionaire?

Apparently the disc is cracked.

This is a joke! I went to see The Wrestler because I was going to watch slumdog at your place. Wow I'm mad. $24 at the ArcLight to see the back of Mickey Rourke's head for 132 minutes.

That's what Jo Pithon said about the back of your head.

It's about the same color as The Wrestler after my debacle with the hair dresser.

So, did you BYOW to Umami Burger? Wondering if you would have paired a Pinot Noir with your Turkey burger... it sounds good to me.

We actually tasted wine there - it was a little business meeting. Burgundy - 5 different Camille Giroud wines, all great with Turk Burg! I think the Gevrey was best with the beef burg and the mushrooms and parmesean crisp. Not that I ate that. Beef makes me nauseous. But if I was going to eat beef I would eat it from here. I like this place a lot.