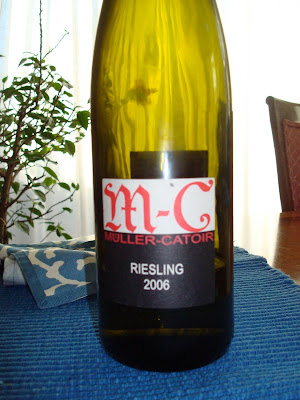 Muller-Catoir, Riesling, 2006.
We bought this in Chicago at a retail store called Sam's. We always look forward to going there whenever we are in town because they have a HUGE selection of so many wines that we don't seem to get in California. One of the categories they excel in is German Riesling.
What's interesting about Sam's is that this time when we walked in the store it was bordering on empty. We asked a sales person why all the shelves were 1/4 full (and this store is a huge warehouse type which made it look REALLY empty) and he said they just weren't buying much right now. I smelled a rat. Or a recession.
My first instinct was right. Something just didn't feel right. And what do you know? Last week I read about a scandal with Southern Wine and Spirits and Sam's in Chicago. Read here! Essentially Southern (and to be fair there were other wholesalers - 10 in all) has been paying off top level Sam's execs for prime shelf placement. I swear, they practically control like 90% of distribution in the US, do they really need to pay people off too??? It REALLY REALLY pisses me off. I mean, a $225,000 fine is a drop in the bucket to these guys and I'm sure there is way more illegal activity where this came from.
I'm not naive, I understand that this stuff happens on many levels. I know a lot of retailers get "incentives" in the form of sports and concert tickets, dinners, free wine, special pricing, etc. But its interesting to look at the law and find out what is legal and what isn't legal. If the big guys really had to abide by the laws - like the ubiquitous tie-ins which are totally are illegal by federal law - would they really be able to move the quantities of wine that they move?
For instance, small wholesalers have very little chance of getting a placement on a wine list in a large hotel chain restaurant. Admittedly, this could be for a number of reasons. First, distribution issues. With Veritas, I generally cannot guarantee next day delivery, and many large venues require that service.  Second, there's the supply issue. Many corporate style restaurants change their wine lists only a few times a year and so there needs to be ample inventory to supply them for 4-6 months. BUT THIRD, to get deals on liquor, or to get DRC or Cristal or whatever, accounts are required to purchase other less desirable wines. As a very small time buyer at the now defunct Vida in Los Feliz (back in 2002), I would keep Covey Run Chardonnay on by the glass because my sales person not only begged me, but always offered me great deals on liquor. Every week there'd be a new offer - like one free bottle of Citron with the purchase of a case of Absolut. And though it wasn't implicitly stated, I did my rep "favors" by ordering cases of wine I didn't like or need in order to keep my liquor costs down. That turned out to be irrelevant as the night time prep cooks drank all the liquor anyway and my costs were out of control. But that's another story for another day. Liquor costs are important and I understand that sommeliers have to think about that when making the wine list, but it doesn't make it any less frustrating for those of us who do not sell liquor and do not want to participate in tie-in offers.
I know none of this comes as news to anybody in the wine business, but it was just on my mind today.
Oh, and my main point is, the Riesling is delicious! So look out for it... because once again I have no idea where it's sold here in LA and I got nothing when I looked on wine-searcher.
Posted by Amy at 10:23 AM

That's a bit hypocritical when your company gives me a pair of Lakers tickets for every case of Uruguayan Tannat I pour into the LA River.

Having wasted a few good years of my life working for SWS, this is not at all surprising to me. It seems that a number of smaller wholesalers could have potentially been put out of business by fighting these allegations while SWS had to pay what amounts to a tiny fine for them. This could have been very beneficial to SWS had some of the other small guys actually gone out of business. Food for thought!

Hmmm, guess you have to be a warehouse-sized retailer (with multiple locations) in order to get the really sweet payola deals...oh well :)


BTW, I believe Sam's was also involved in a separate scandal this year in which they informed customers that their '05 Bordeaux futures orders -- paid for 2 years before -- wouldn't be fulfilled. It caused a huge stir on eBob and other boards, and I believe they sorted it out, but that might be another indication of financial troubles.

Hey Amy. Call me sometime. I have something very interesting concerning Sams wholesale and ethics in the wine trade to tell you. Not willing however to discuss it on the blog though. Big brother is always watching.

Ian - will try you tomorrow!

No, those weren't Lakers tickets those were to the Clippers. So, again, my point is made.