Never too early to drink. 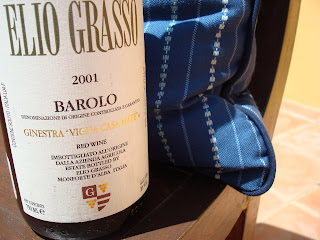 So I have to be quick because Peter is forcing me out the door to the Cubs game (that's what he calls it - I say - umm - aren't the Dodgers KICKING THEIR ASS? So wouldn't you call that the Dodger's game?)

At any rate, we had a fantastic bottle of wine last night. Elio Grasso, Barolo, Ginestra "Vigna Casa Mate", 2001. I had the pleasure of meeting the winemaker, Gianluca Grosso, a couple months ago and unlike La Spinetta there's no rotofermenters, so the wines tend to be not as upfront with the fruit, but they are
extraordinarily complex. A great balance between traditional and modern. Very perfumed and the tar and dried herb flavors are so deep and enticing. It's not cheap, but considering the quality, it's not expensive either. Peter bought this at Woodland Hills Wine Co. for $54.99. The texture of this wine was so explosive - the tannins and acid were totally huge and rich and WHAM BAM THANK YOU MA'AM. Delicious. We drank the bottle in about 35 minutes. Pathetic. We may have been a little premature opening it so early, as this wine has a long long time ahead of it. I need another bottle!

I'm sure, however, that the Barolo won't even come close to comparing to the warm flat $9 Rolling Rock in a plastic cup that's in my near future at Dodger's stadium... Go team.
Posted by Amy at 3:30 PM

Funny that we had 3 of the same wines within a week. First, the '97 Lopez de Heredia Rosado. Then the '07 Txakoli Gurrutxaga. Now, this Elio Grasso, Barolo. Though I had the '04 Barolo, not the '01. The '04 was very good, but definitely needs more time in the cellar.

Richard, that is hysterical - coincidence?? Can't be... now if you had the Campolargo I'm going to get creeped out!