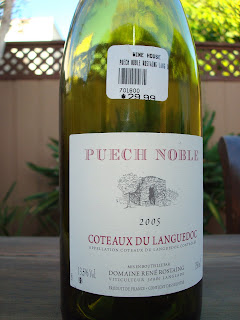 Like Prince, my selection today has had a name change.  The wine formerly known as Puech Chaud, is now Puech Noble.
Famed Cote-Rotie producer Rene Rostaing's Languedoc project, Puech Noble, 2005, is a wee stinky and reduced upon opening. Peter and I looked at each and thought - what's the deal with all these Southern French producers who can't figure out that syrah is naturally reductive and that maybe steps should be taken to ensure that it doesn't come out the bottle smelling like hard boiled eggs or just plain like ass?? (Apologies to the children or those with sensitive ears who may be reading this)
Anyhoo, the "stank" eventually blew off with decanting for a couple of hours and it turned out to be a really great little wine. Minerally with primary black fruits and light tannins. Good acidty too. You know I like me some acid.
Peter loves the Rostaings. Rene's son Pierre worked at Stolpman in 2006, and Peter has been to the properties (both in Cote-Rotie and in the Coteaux de Languedoc). He says that the soils are amazing, just rocks, it's very desolate. So, the verdict is I really like this wine, just wish it had been $24.99 instead of $29.99. That damn Euro is killing us. Available at the Wine House.
Posted by Amy at 10:05 AM