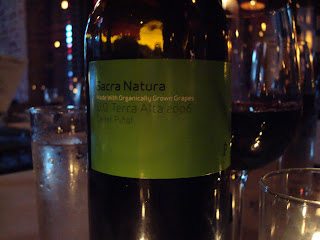 Ok, well, I was outed last night as wine republican. It's true. I admit it. I am reluctant to try new things. New grape varieties and new regions typically do not interest me. I've been let down by too many odd ball cheap wines in the past to continue to pursue them. If I had it my way I would drink the classics all the time! I may as well be George Bush. So sue me.

BUT I want to say, I was shamed by none other that my friend Bill, Billy, Mr. Fernandez, Mr. Try New Things.

We ate at Cobra and Matadors on Hollywood between Hillhurst and Vermont. We had some snacks and Bill recommended an organic wine, Terra Alta, Vinos Pinol, Sacra Natura, 2006, which I was sure I was going to hate because it was from somewhere I didn't really know (South of Priorat in Spain) and was a blend of 5 varieties, Cabernet, Merlot, Syrah, Tempranillo and Carignan. $13 a glass, $58 a bottle.

I leaned over to Cara and said, "$20 says I hate this wine!" Bill brought the wine to the table, poured it for us and something unusual happened. I liked it! It has a great backbone of acidity and really good tannin structure without being astringent. Lots of red and black berry fruit and cardamum and cinnamon spice too. I thought it was really delicious! Not that cloyingly oaky and fat Priorat style I was expecting.

So I want to say, I stand corrected. I will stop being such a doubter. I recant my position on odd ball wines. I will try new things and I will even attempt to LIKE them! 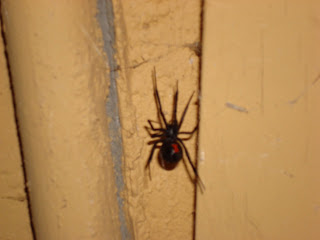