Do not read this. 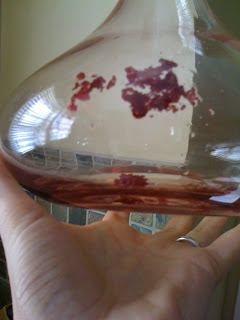 I like to decant wine because I think most all wines do better with some air. This one left a surprise at the bottom of the decanter - loads of tartrates. Tartrates are perfectly harmless and completely tasteless, but when they get caught in your mouth the crystalized texture is fairly unpleasant.

Now for the really boring part... As if that wasn't enough.... There are two primary acids in grapes, malic (found in apples) and tartaric (found in, well, grapes). As grapes mature on the vine, they lose malic and gain tartaric acid. These tartrates are present in wine as potassium tartrate or cream of tartar - that stuff that no one quite knows what to so with in their spice cabinet. Potassium tartrates are partly present as salts that if not properly stabilized during production will precipitate out in wine over time and especially at lower temperatures. Have you ever put a perfectly clear and clean bottle of white in the fridge only to pull it out a week or so later and see that there's now "stuff in the bottle?" Just do a little decanting... and then you can be like me and post the most boring blog entry ever produced.
Posted by Amy at 9:21 AM