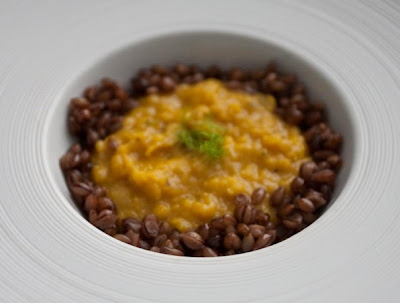 I am doing the wine for a series of lunches (one a month on Sunday at Melisse). My friend, Brigitte Caland, is a classically trained French chef who is incidentally also an expert in ancient languages. She's a very smart and very cool person and an amazing chef. All the food is a modern interpretation of the ingredients they were using in these areas long long ago. Brigitte is even sticking to the utensils and pots used to make these meals. All her research on the food has been taken from ancient texts and their original languages. Above is one of the dishes that will be served next Sunday though I've been sworn to secrecy not to reveal the rest!
Please join Brigitte Caland in her new culinary adventure: cooking at Melisse once a month. Meals are inspired by literary and historical texts. 1:00 pm at Melisse, Santa Monica $65 per person food only ($90 with wine pairing) $450 for the series ($650 with wine pairing) wine list available separately.
October 25 menu inspired by Mesopotamia
November 15 menu inspired by Ancient Egypt
January 24 menu inspired by the Bible
February 21 menu inspired by Ancient Greece
March 21 menu inspired by Ancient Rome
April 18 menu inspired by the New Testament
May 23 menu inspired by the Abbasids
June menu inspired by Suleiman the Magnificent
Brigitte Caland has studied Semitic languages at UCLA and has degrees in Arabic and Hebrew from INALCO-Paris. She is currently preparing her Doctoral dissertation. After finishing cooking school, she trained at Marc Meneau- L'Espérance, Philippe Legendre- Le V (Four Season) as well as the Pourcels brothers Maison Blanche in Paris.
Posted by Amy at 3:59 PM

Sounds absolutely awesome! I'm very sorry this is not going on near me.

Your dal is getting dull.

Google? Thanks for the tip.