V is not for aliens. 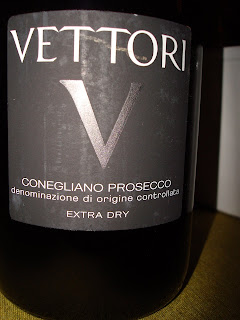 Prosecco is from the Veneto regionin Italy. The best come from Conegliano and Valdobbiadene. Vettori is from the former, and unlike the previous Prosecco post which was a brut (dry) style, this one is extra dry, which means it has a little bit more sweetness. Only around 3000 cases were made which makes this super small production.
It's more floral and fruity and less earthy that the Zonin. From what I recall after mixing the first Prosecco with Vodka, this one is more frizzante in style, a little less bubbly.
I love the label. So modern and austere. It reminds me of that TV Series in the 80s "V" where the aliens invaded earth, remember that? Wish they'd brought some Prosecco with them instead of all that anger and disease.
You can get the Vettori at K&L for $15.99.
Posted by Amy at 6:53 AM